Cookies OK?
Fave quote:
"The operation was a success, but the patient died" (22). 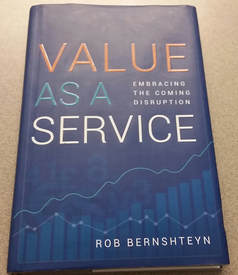 This 170 page book has a great message that can be summarized like this:

Instead of selling stuff to people, partner with them by defining and pursuing success in their terms, sharing some skin in their game.

Easier said than done.  To get there, one must stop both selling stuff, and selling time, and become willing to share both risks and rewards.

One must also find clients who are not looking to buy stuff or time, and who are willing to share rewards.  Not everybody is.

One must find clients who are goal oriented.  Not everybody is.

Indeed, one must find clients who are so goal oriented that their goals can be quantified clearly enough to form metrics that determine one's compensation, and who are honorable, professional, mature, and stable enough to keep agreements they make about it, consistently.

I'm doing that now, but figuring out how took me several decades.  Having recently figured it out, I found this book both encouraging and validating.


​Since it's about Values, it's an Axiological book.

Axiology asks, "How can we know what is valuable . . . in absolute terms, good or bad; and in relative terms, better or worse?

How can we know?"

Well, think again.  Because if you were right, the world would be a much more agreeable place than it is.

People differ vehemently about what is good or bad, better or worse.  That is why politics and elections are so evenly split most of the time.  It's why there are schisms, divorces, and wars.

It's also why good deals exist.  By definition, a good deal is something that is under-priced.  Its intrinsic value is higher than its price.  Whoever is selling it does not understand how valuable it really is.

This is why Axiology is so important.  It can help reconcile differing opinions by introducing some fresh objectivity to what is otherwise a highly subjective space.

Without ever using the word, Bernshteyn infuses Axiology into the vendor-client relationship.  He says that in the past, vendors speculated about what clients valued, created products or services that they suspected might work, and offered those products or services for sale.

Likewise, the client speculated about whether the vendor's product or service might work, assumed the whole risk of buying them, and learned.  Regardless whether the products or services worked, the client bore the whole liability, and risk, and paid the whole cost, often suffering Buyers' Remorse.

By infusing Axiology into the vendor-client relationship, nobody has to speculate any more.  They can KNOW.

And instead of the client bearing all liability, expense, and risk, those things are SHARED with the vendor, along with the rewards.

It's a beautiful, elegant, fair, sane, and humane business model.

​It's also long overdue.  It's about time we all did business this way.
If I can summarize the book in one sentence, why would anyone need to write it?

Because Axiology is hard.  It's about culture:  working with it as it is, and changing it over time . . . or, if changing it proves impossible, knowing when to walk away.

And in a modern culture that celebrates diversity, developing agreement about values is an uphill battle.  These days people are disinclined to agree about values at all.  They're more inclined to "agree to disagree."  In many, many cases, that's the best one can hope for.

But it's not good enough.

This lame queasiness about values was evident in Bernshteyn's own prose.  From the way he wrote the book, I could tell he's still struggling with it himself.


​Having just finished Charles Haanel's 1916 classic The Master Key System, I found the contrast about values between then and now most obvious.

Then, there was a focus on Natural Law.  Now, we find ourselves in a Narcissism Epidemic, in which everyone is a law unto themselves, actually hearkening back to an earlier time when "everyone did what was right in their own eyes" (Judges 17:6, 21:25).

Then, because narcissism was not as rampant as it is now and people were more comfortable expressing imperatives because of their confidence in Natural Law, the style of expression was less personal, more principled.  The pronoun "one" was more popular than it is now, "I" and "you" were correspondingly less popular, and people had no problem saying "must."

Now, narcissism is rampant, many people are out of touch with Natural Law, and when they feel the need to express imperatives, they're at a bit of a loss.  Instead, they substitute "must" with "need", often ridiculously ascribing needs to abstractions, inanimate objects, or other people.

Bernshteyn does this throughout the book.  After a while as I noticed this pattern, I began marking up the book, editing it.  I felt annoyed.

Why?   Because I have learned not to trust people who deal awkwardly with imperatives.  To me it means that they're out of touch, that they're kind of foggy and numb to important forces of nature like electricity, gravity, weather, physics and the math we use to symbolize it, the dynamics of cause and effect, and Adam Smith's "Invisible Hand" of Enlightened Self-Interest.  It suggests to me that they might be out of touch with God Himself.  I don't feel safe around such people.

Masking imperatives with contrived "needs" ("You need to ____", "This needs to happen", "Values need to resonate with your employees", etc.) raises red flags for me.  It tells me that either this person is confused and unsure of him or herself, or s/he is being willfully deceitful, manipulative . . . playing some kind of shell game, dissociating agency/volition/will from one person onto a tangible or intangible thing, or onto another person.

It is a kind of creepy ventriloquism that I've learned not to tolerate: casting your voice onto someone, or something, else, because . . . why?

I can only conjecture.  Confusion?  Cowardice?  Deceit?  Manipulation?  All of the above?  Again:  it's creepy, like dealing with a closet ventriloquist whose puppet is not plainly situated on his or her hand on a stage, but who sees the whole world as his or her puppetry stage.

Indeed, Sockpuppetry has become A Thing, whether it's Catfishing in online dating, foreign election meddling, Impersonation, or Identity Theft.

We need to improve our Early Detection Systems.  With time and experience, I have learned to do this by paying close attention to language in general, and in particular, to the way people express imperatives.

People who are confident about their values, Natural Law, and Nature's God have no problem saying or writing "must."  People who are not confident have a tendency to Sockpuppet:  to do that creepy ventriloquism thing, casting contrived "needs" onto other people, and onto both tangible and intangible things.

And this is not just some idle pet peeve.  In a discussion about values, it matters because a lot of us value things like honesty, simplicity, and Truth.

To me it's a dead give-away, and I'm sorry that Bernshteyn does it; but I don't blame him.  It's a cultural thing.  I don't suspect he's trying to deceive anyone . . . it's just a style he has picked up, a regrettable habit that dilutes the message in what is otherwise a very good book about the future of business relationships.

(Indeed, I'll bet his teachers did it in the classroom, and he learned from them.

​It's not his fault.  It's theirs.  Teachers are the ones who should know better, but the sad fact is, they do it all the time.  They're some of the worst perpetrators.)

Maybe he'll read and appreciate this review since it is, after all, about values.

Otherwise, it's a great book that could be even greater if the author improved his comfort level expressing imperatives.  The book's message is, indeed, imperative.

As I've learned, we must recall that good business has always been and will always be about delivering value as a service, fiduciary duty, and empathy, and fashion our agreements accordingly.

I'm committed to doing precisely that.