Cookies OK?
Fave quote:
"You can't experience the ocean if you cling to the shore" (233).​ 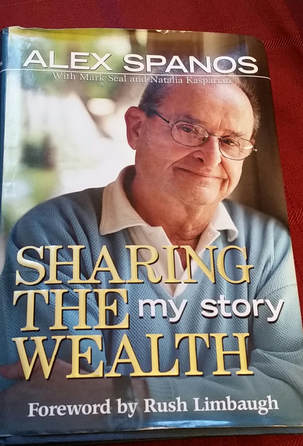 I have a very close and respectful relationship with the Orthodox Church.

On October 10, 2018, I received an email from Greek Orthodox Metropolitan Gerasimos of San Francisco announcing the passing of Alexander Spanos.  It was a glowing message praising Mr. Spanos for his generous philanthropy and successful marriage and family life.

He wrote, "This is truly the passing of an era. Alex's story proved that the American dream was a reality, and he was grateful for the opportunities given to his parents when they came to this country, as well as the vast experiences he had throughout his life . . . .  While he had a successful career in real estate development, as the owner of an NFL franchise, and a renowned philanthropist, Alex was most comfortable surrounded by his loved ones. After nearly 70 years of marriage, his beloved Faye departed this world just two months ago, and his heart longed to be with her. They are now reunited in heaven and both are restored to wholeness and joy in the Lord's Heavenly Kingdom."

Seventy years of marriage:  wow, I thought.  That right there caught my interest, admiration, and respect, not to mention his professional and philanthropic feats.  Here, I thought, is a man I'd like to emulate, a man worth knowing.

So I Googled around and discovered that he had written his autobiography in 2002.  I bought and read it right away.  Paging through the book from front to back, here are some noteworthy take-aways I found:
​
Respectfully submitted,