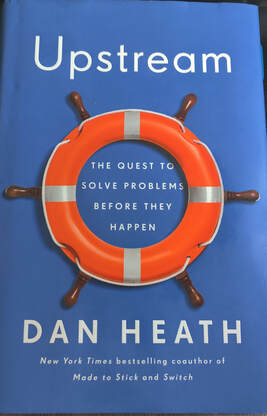 I learned about Upstream while working out, listening to Brett McKay's March 9 Art of Manliness podcast.  It resonated with me because "upstream" work is what I've always done . . . in the language of Steve Covey, "Second Quadrant" things that are important and not urgent.

"Upstream" comes from the analogy Heath gives about fishing drowning kids out of a river, versus going upstream to solve the reason they're falling into the river in the first place.

He points out that upstream work requires extra effort.  It requires owning problems that most choose to ignore (like the national debt).  It requires working around, or improving upon, perverse incentives like fee-for-services in health care that react to sickness instead of preventing it, or hourly billing that rewards inefficiency and disregards value creation, fixating on efforts instead of results.

It requires innovating new metrics, revenue and compensation models, workflow and project management tools and techniques, professions, ​and businesses (like Making End$ Meet).  It requires getting past narrow personal interest, looking at the bigger picture, and caring enough to do something about it.

​Usually with upstream work, in the short term there's no money in it.  Compensation wise, the cards are stacked against you, and you wind up leaving a lot of money on the table, being man enough to walk away from perverse incentives, sleeping better with a smaller bank account and a cleaner conscience.

It requires caring about The Greater Good.

It's quietly heroic . . . in terms of results, more heroic than the conspicuous heroism of rescuing drowning kids.

Attention seekers need not apply.  This is for people who are interested in doing the most good, not getting the most attention.  It's quiet, methodical, patient, persistent, data-driven, far-sighted, circumspect, behind the scenes, and beneath the surface.

I'm going to divide this review into two sections:  Favorite Cases, and Favorite Quotes.
Favorite Cases
Favorite Quotes
Closing Thoughts
Getting Specific, Getting Personal.  One theme I noticed in the book that is not neatly contained anywhere in it, within a particular section or chapter, but is more like a thread that runs from end to end, is the significance of getting specific and personal.

Regardless whether the problem was teen alcoholism, homelessness, poverty, or domestic violence, upstream workers gained traction when they started naming names.  They didn't just deal with "the homeless" as a category.  They focused on individuals.

They didn't just deal with domestic violence victims as a category.  They asked, "How are we going to save           's life this week?  Where is her stalker, and what is he doing?"

​They kept lists in databases, tracked granular metrics on individuals over time, and summarized them to monitor progress.

Cross-Collaboration.  Another thread I noticed running through the whole book was how organization departments that had previously operated each in their own isolated silos and in some cases regarded one another as competitors or adversaries, came together and collaborated . . . in many cases face to face, over coffee.

For example:  law enforcement, social services, and health care.  Imagine what would happen if a cop, a social worker, and a nurse, all of whom were working with the same individual within their own lane, were able to meet for coffee once in a while to compare notes and gain insight.  This is consistently what happened in all successful cases.

Especially in the Drug-free Iceland case, it was ALL ABOUT regular meetings between community leaders.
Respectfully submitted,