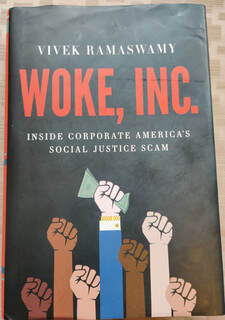 This is a fairly straightforward and predictable book that I read in 14 hours in February and March of 2022.  I admire Ramaswamy's courage because in writing it, I am sure he did not make a lot of friends in high places.

One thing that did surprise me is that he advocates mandatory summer public service for adolescents.  Mandating anything for a right-leaning freedom lover seems counter intuitive to me, but he makes a compelling case, comparing it to mandatory public education or the best New Deal programs like the Civilian Conservation Corps.

One point he made that really resonates with me is that when we connect Service with Capitalism, we lose the sense of rendering service for its own sake, the understanding that virtue is its own reward.  He calls this "muscle memory" that participants in Woke Capitalism miss.

As the son of East Indian immigrants, graduate of two Ivy league schools, and an ex-CEO of a Pharma company, he knows what he's talking about, and dives deeply into the murky depths of corporate and international intrigue.  One notable quote:  "Wokenomics whitewashes the abuses of dictators abroad while condemning the actions of government at home" (169).  How?  Well, you have to read the book to find out.  Another:  ". . . the DOJ (Department of Justice) punished [Pharma bro Martin Shkreli] for . . . bringing too much heat down on all the more polished pharmaceutical elites" (155).

He proposes replacing "Diversity, Equity, and Inclusion" with "Excellence, Opportunity, and Civility" (270).

". . . it's diversity of thought that's supposed to matter, not a kind of diversity crudely measured by appearance or accent.  At some point we all started using superficial qualities as proxies for intellectual diversity" (219).

". . . when institutions conflate racial and gender diversity metrics with diversity of thought in their organizations, they implicitly reinforce the incorrect assumption that genetic characteristics predict something important about the way a person thinks - the most fundamental assumption underlying racism itself" (266).

". . . nothing is allowed to be ordinary anymore.  Partisanship now infects everything and attaches sanctity to even the most mundane consumer decisions.  In the American search for identity, to give our lives meaning, we make the ordinary sacred" (278).

". . . once Woke Consumerism sparks a protest, Woke Capitalism can pour gasoline on it" (285).