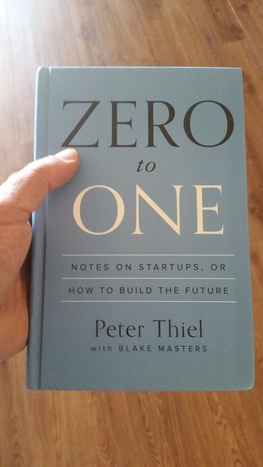 I learned about this book at Tim Ferriss' podcast, and was struck by, as a billionaire, founder of Paypal and Palantir, and founding investor in Facebook and LinkedIn, how both understated and credible Peter Thiel is. I thought to myself, here is a man who sees the big picture and understands how the world really works. I recognized how, by putting his thoughts between two covers of a book in plain language to share freely with whoever is inclined to pay attention, he had given an incredibly generous gift to the world. Clearly, it is not just another book.

I got it quickly and devoured it eagerly. After the first reading, I decided to go back and read it again, this time taking careful notes. From these notes, here are the eleven lessons I learned:

On what important truth do very few people agree with you?

( In a related question - “What valuable company is nobody building?” - he contends that its answer can lead to great businesses.)  I have a few:

This is just a partial list. For more secret solutions to hard problems, please explore this web site.

He ends the book on an encouraging note: “Our task today is to find singular ways to create the new things that will make the future not just different, but better – to go from 0 to 1. The essential first step is to think for yourself.  Only by seeing our world anew, as fresh and strange as it was to the ancients who saw it first, can we both re-create it and preserve it for our future.”

Reading it has already helped me do a better job of adding value to my clients' economies. For example one client was discouraged by a momentary loss and felt like his business was worthless and failing. Recalling an example from the book, I pointed out to him how investors value companies based not on past profitability, but on anticipated cash flows – a great example being the difference in market capitalization between the historically profitable New York Times, and Twitter.

It's really a case study in the credibility of Biblical faith: the assurance of things hoped for, and the conviction of things not seen. It's all about your view of the future.

It's a singular book. I'm really glad I read it carefully, and I am sure that, in ways I have yet to notice and that will surprise me when they happen, it will continue to help me improve my work and be even more valuable to you.

I hope you find this review edifying, profitable, and useful.